Shawna Romkey is busy this year! She has another upcoming release, Crow Moon, which is currently available for pre-order for only $.99! And look at that gorgeous cover! Keep reading for an excerpt. 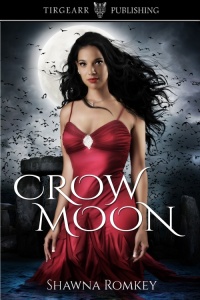 Will you be ready when the Crow Moon comes?

When Lenore Devereaux loses her father, she’s sent to live with her eccentric aunt. Leni wants to go off to college and do what her father has always wanted her to do, but the mysteries of her estranged mother’s family lead her to start unraveling the secrets long ago lost and hidden away. Will she be able to find out who she really is while living up to her father’s last wishes, or will the powers of the Crow Moon claim her for itself?

Shawna grew up around farms in the heart of Missouri but went to the University of Kansas, was raised in the US but now lives on the ocean in Nova Scotia with her husband, two sons, one rescue dog and one overgrown puppy from hell. She’s a non-conformist who follows her heart.

She’s taught English at the university and secondary levels for close to twenty years and can’t quite fathom how all of her students have grown up, yet she’s managed to stay the same.  She’s a huge geek and fan of Xena, Buffy and all kick ass women, and loves to write stories that have strong female characters.

“Let my heart be still a moment and this mystery explore…”
Edgar Allan Poe, The Raven

The day would’ve been dark and dreary enough on its own without the added task at hand. How had it come to this? She stared straight ahead as she drove to her new home to live with an aunt she’d never met. The charcoal clouds hung heavy over the road, reminding her of how they looked just last week, the day of her father’s funeral.

The straight shot from the highway gave her nothing interesting to look at. Trees were sparse. Some quiet farms popped up every now and then, but for the most part I-70 lay straight and plain. Fields still cold and barren were iced with the latest blanket of snow. Lazy windmills weren’t motivated enough to spin without the wind egging them on. After taking the exit ramp though, the trees filled out. Soon enough she made it to her aunt’s where things became more interesting. Bentley Manor was off a lesser-known, less-traveled highway, and sat up on a hill, staring menacingly down at the passers-by below as though to say, “Keep driving. Nothing to see here,” though it was the most intriguing thing she’d seen in the past forty-five minutes.

She meandered up the winding, tree-canopy covered gravel drive to Bentley Manor. Though she’d seen images of it on Google Street View, it was an experience in person. The façade was a dark brick, a rusty red, and the crow’s nest sat on the top lined with sharp, wrought-iron rails. Four majestic white columns striped the front face, but two were closer than their counterparts, making the front asymmetrical, off key. The thick woods of the state park crowded up to the property on the left, and cleared farm fields stretched for acres on the right. A large barn and some outbuildings stuck out to the side from behind the mansion.

Two thick, naked trees rose higher than the mansion itself, stripped of bark, hacked by axes, and scarred by lightning. They stood, an angry guard, at the front of the estate. One, using what few branches it had left, pointed accusingly in the direction of the driveway at would-be guests.

Leni fought back the urge to speed away with a deep breath and forced herself up the crescent-shaped drive.

The snow from last night dusted the cement stairs to the front door. There was a cold January bite to the air. She tightened her blue and green plaid pea coat snugly around her and gazed warily up at the front of the home.

She knew of her mother’s family without having gone through the trouble of meeting them. Her parents had told her about them at least. The Bentley’s were wealthy. This was just one of the properties her grandparents had given their children. She didn’t know what they did to earn such money. How was it that her mother’s family could have multiple homes including this extravagant one? For most people, one mansion in the family would be enough, but not the Bentleys.

The front double doors burst open before she’d raised a hand to knock causing Leni to jump back. A tall woman in her mid-forties with pale skin and dull, red hair braided to hang down one side stood in the doorway. This had to be her aunt. Leni could see shadows of her mother in this woman. They shared the same hair color, the same green eyes, and of course, the same skin color. Leni pulled back as apprehension seized her. She was suddenly cognizant of her black hair, grey-green eyes, and dark skin. These were things she’d shared with her father, and she’d had very little to do with anything of her mother’s once Debra had walked out on them when Leni was only ten years old.

“Lenore? I’ve been expecting you.”

Hippie chick who is still hoping to change the world someday. Author of the fantasy novel, Thief of Hope.
View all posts by Cindy Young-Turner →
This entry was posted in Book release and tagged Crow Moon, new adult, paranormal, Shawna Romkey. Bookmark the permalink.