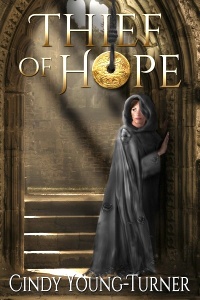 Sydney, a street urchin and pickpocket in the town of Last Hope, has managed to evade the oppressive Guild for years, but there is no escaping fate when she’s sentenced to death for associating with the resistance.

After she’s rescued by a wizard, Sydney is forced to accept that magic-long outlawed throughout the Kingdom of Thanumor-still exists, and the Tuatha, a powerful faery folk, are much more than ancient myth and legend. When the wizard offers a chance to fight the Guild and bring Willem, bastard prince and champion of the Tuatha, to the throne, Sydney embraces the cause as a way to find her own redemption.

But Sydney’s fear of the Guild, distrust of authority, and surprising connection to the Tuatha threaten Willem’s success. Can she untangle the strange threads that entwine her life not only to the fate of the kingdom, but also to Willem himself?

Thief of Hope was a 2012 EPIC ebook award finalist and a 2012 Compton Crook Award  finalist.

Add it to your Goodreads shelf:

Currently in progress, the sequel chronicles the further adventures of Sydney and Willem. In this book, they face new challenges and a dangerous magic that threatens their kingdom and the faery realm.

2 Responses to Thief of Hope