I really enjoyed Jean Murray’s Soul Reborn! So glad she is re-releasing it and check out the gorgeous new cover!

THE HUMAN REALM, HIS BATTLEFIELD

Asar, the Egyptian God of the Underworld, has been tortured and left soulless by a malevolent goddess, relegating him to consume the very thing he was commissioned to protect. Human souls. Now an empty shell of hatred, Asar vows to kill the goddess and anyone involved in her release, but fate crosses his path with a beautiful blonde huntress who has a soul too sweet to ignore.

Lilly, fearless commander of the Nehebkau huntresses, is the only thing standing in the way of the goddess’ undead army unleashing hell on earth.  But Lilly has a secret—one she is willing to sell her soul to keep. If the Underworld god discovers her role in the dig that released the goddess, she will lose everything, including his heart.

Get your copy today and have it delivered to your Kindle April 1st.

Ready to read more Key to the Cursed Series?

“Only the strongest love can unlock the souls of the Underworld.”

Night Owl Reviews:  Reviewer’s Top PICK / 5 Stars (Abigail, Feb2013)  “The first book in the “Key to the Cursed” series was absolutely phenomenal. Anything that deals with old world deities and is written well always hooks me from the get go. This was definitely an excellent book to begin a new series.”  http://paranormal.nightowlreviews.com/V5/Reviews/Angibabi4-reviews-Soul-Reborn-by-Jean-Murray 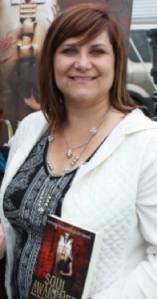 In her pursuit of a nursing degree, Jean Murray aspired to see the world and joined the Navy. At the end of 2011 she said a heart-breaking goodbye to her Navy family and retired after twenty years of military service. Although her dreams of writing full time have yet to come true, she continues her writing journey and draws inspiration from her travels abroad. She enjoys spending time with her family and of course, writing about the “Carrigan sisters and their mates, Gods of the Underworld,” to bring you the next installment of the Key to the Cursed series.

Hippie chick who is still hoping to change the world someday. Author of the fantasy novel, Thief of Hope.
View all posts by Cindy Young-Turner →
This entry was posted in book cover and tagged Jean Murray, Key to the Cursed series, paranormal romance, Soul Reborn. Bookmark the permalink.