I’m excited to share another great cover, this time for January Black by Wendy Russo! You will want to check out this YA SF novel (available for pre-order on 11/28)! 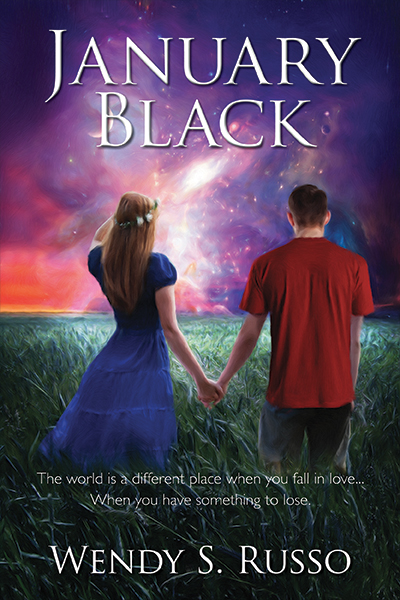 Sixteen-year-old genius Matty Ducayn is the son of The Hill’s commandant. As such, he’s expected to conform to a strict, unspoken code of conduct. Small acts of defiance over years—such as walking on the grass—have earned him a reputation for being unruly. When sarcastic test answers finally get Matty expelled from school, King Hadrian offers him a diploma if he can answer a deceptively simple question, and then dismisses the only answer.

To prove his worth to society, Matty wrestles with the king’s word games, the kingdom’s historical record, and laws that don’t make sense. He meets Iris Locke, a street smart gardener, along the way. After enchanting him at a glance, Iris helps his research, keeps him out of trouble, and finally breaks his heart.

Alone again, Matty finds himself on collision course with a deadly law, one he will have to break to answer the king’s question. Was Hadrian challenging him, or teaching him a lesson? Without Iris, it won’t matter, because Matty won’t stand down for anyone else.

January Black is the 2013 Readers’ Favorite Silver Medal winner for YA-Coming of Age.

Liliana Sanches started studying Visual Arts at the age of 16 and soon felt attracted to the Romantic artwork from the 19th century. The Pre-Raphaelites and Friedrich were her biggest inspirations at the time, and she felt compelled to explore this graphic language of desolated landscapes that were the reflection of the painter’s emotions.

After graduating college, specializing Graphic Design, she created her own business under the name of “Princess of Shadows.” Her style had now evolved and had technical knowledge to support it. Intricate concepts with a much better grasp of image composition and visual balance, and also used color and shape psychology to imprint her work on the viewer.

Along the years she has been working with musicians, authors and even other designers who have allowed her to express her creativity, develop visual communication skills and explore different graphic styles to better suit each project.

Nowadays, here personal work has been exploring the human psyche, imbuing it with a dark surreal feeling. Her biggest inspirations are J-Horror movies, dreams/ nightmares and mental health pathologies.

Princess of Shadows on DeviantArt

Wendy S. Russo got her start writing in the sixth grade. That story involved a talisman with crystals that had to be found and assembled before bad things happened, and dialog that read like classroom roll call. Since then, she’s majored in journalism (for one semester), published poetry, taken a course on short novels, and watched most everything ever filmed by Quentin Tarantino. A Wyoming native transplanted in Baton Rouge, Wendy works for Louisiana State University as an IT analyst. She’s a wife, a mom, a Tiger, a Who Dat, and she falls asleep on her couch at 8:30 on weeknights.

Hippie chick who is still hoping to change the world someday. Author of the fantasy novel, Thief of Hope.
View all posts by Cindy Young-Turner →
This entry was posted in book cover and tagged January Black, Liliana Sanches, science fiction, Wendy Russo, YA. Bookmark the permalink.