It’s day 2 of the Blogger Book Fair! Don’t forget to check out the Reader’s Choice Awards and vote for your favorite book. Shameless self-promotion: Thief of Hope is in the fantasy category.

And now for our next featured author, R.J. Burroughs, author of The Boys of ’58. 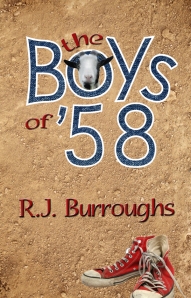 R.J. Burroughs is a funny guy—just ask his friends. After telling story after story and hearing, “you should write that down,” many times over, Burroughs finally did. That’s when The Boys of ’58, his first novel was born.

The story is set in small-town Oklahoma 1958, and while Burroughs takes his readers on the hilarious journey of a small gang of boys and their shenanigans, the real punch line is not how they get themselves into mischief but how they creatively manage to keep themselves out of trouble all summer long. The more comedic lines include some divine intervention as well as a fainting goat.

Burroughs is sure that everyone will find someone from their childhood, maybe even themselves, in the pages of The Boys of ’58.”

R.J. Burroughs is a civil superintendent and travels extensively in the US and Canada. He finds time to write in the evenings and on weekends while he is away from home with his work and refers to writing as his “golf.” Although he never thought his knack for storytelling would gain him the title of published author, he’s happy now that he went through the difficult process of trying to find a publishing home for his yarns.

He was born in Oklahoma City and raised in Chickasha, Okla. where he graduated. He now lives, with his wife Marsha, in Wewoka, Okla. The couple recently moved there from Norman, Okla. where they had lived for  eight years. They have two daughters, one son and two grandchildren.

Print and e-versions of The Boys of ‘58 can be found at
http://www.amazon.com/, www.books.google.com/ebooks, and http://www.barnesandnoble.com/ and wherever books are sold.

Information about the book and the author can also be found at the publisher’s website: http://www.martinsisterspublishing.com/.

Sounds like a rollicking trip down memory lane. He’s hooked me with the fainting goat!

Hippie chick who is still hoping to change the world someday. Author of the fantasy novel, Thief of Hope.
View all posts by Cindy Young-Turner →
This entry was posted in Book Fair and tagged 2012 Blogger Book Fair, All's Fair in Blogs and More, fainting goat, memoir, R.J. Burroughs, small-town Oklahoma, The Boys of '58. Bookmark the permalink.