Interview with a vampire author

Critique partner and friend Vic Brown is riding high on the recent publication of his first novel, Vampire Resurrection. If you are a vampire fan, you will want to check out a new and interesting take on the genre. Vic was kind enough to do an author interview, but first let’s find out about his book. 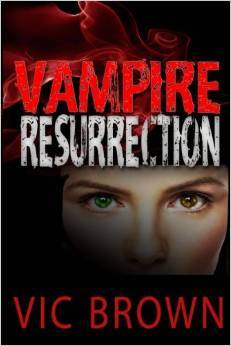 Lamar Bradford, wealthy owner of Coleson Manor, is a third generation offspring of a polluted blood line, and the gene for vampirism that he carries in his DNA has just been triggered. Morgan Summers, a 325-year-old vampire, who was forced to watch her mother pressed to death as a witch in Salem Village in 1692, is searching for the key to mortality. Lamar has it, but it comes at a high price. Stalked by a sinister and clandestine arm of the Roman Catholic Church—the Order of the Vampire Final Solution–the OVFS has tracked down and killed fifty-seven vampires since its inception in 1925. Morgan Summers is to be their fifty-eighth conquest, with Lamar soon to follow. But there is hope. Dr. James Heller, Dean of the Faculty of Arts and Science is also Director of Harvard’s Genetics Laboratory. Heller’s scientists are desperately working on a gene-splicing technique that would provide resurrection for vampires—a return to mortality and humanity. Will Lamar and Morgan defeat the OVFS and those trying to destroy them? But more importantly, can a secret resurrection project succeed to save others trapped by the vampire gene?

Buy it on Amazon

A: I was born in Washington, D.C. and raised in Silver Spring, MD from the age of four until age twenty-two. During a 30-year career in the USAF, I moved a lot, but since retiring, have lived in three locations in Maryland and for the last three years, we have lived in Williamsburg, VA (for our “Fourth Trimester”).

A: I wrote my first fiction—a short story—in the 6th grade and have loved to write ever since. I have written 72 articles for publication in a monthly jazz club newsletter, a lifetime of non-fiction during my USAF career, a filing drawer crammed with short stories, a novella, three novels, a memoir and various other bits. Am working on another novel, the sequel to one published in March 2015—Vampire Resurrection (available at AMAZON). I have been writing for over 60 years.

Q: Your novel, Vampire Resurrection, describes a unique take on vampires. Why vampires?

A: After a vineyard full of rejections, I decided to go against the “rules” and write to the market. Vampires form a strong nitch market. I had read or watched very little vampire-related material, but I chanced to read a long article on gene-splicing in the Health and Science section of the Washington Post and the idea for a novel flashed through me. Vampires who wanted to become normal, mortal human beings through having their DNA altered. I tried the opening chapter and was enroute to creating a completely new approach to vampirism.

A: It took me about six months to create the first draft. Critiquing, editing, rewriting took almost another year. I worked on each chapter as if it was a standalone work, so it is hard to put a number to how many drafts I created before it went to press.

A: Long, meandering, frustrating, and challenging! One of the significant factors in the game is LUCK. I attended a course in writing in Virginia Beach. The literary agent and CEO of High Tide Publications, Inc. attended. They offered to listen to “elevator pitches,” and I pitched both of them. They asked for my first three chapters, then the whole novel (which wasn’t quite finished yet). They sent me a contract and I was graduated from writer to published author. I was glad I had not self-published my vampires.

A: Aspiring writers are inundated with advice, and I hesitate to try to add anything. But for those who are not trying to make a living from their writing I would add this to their pile of advice: Never lose your love of writing because of the process. Getting published is not the be-all or end-all of life. Creativity is. So be creative. Have a large basket at hand, and fill it with faith. During your journey, ENJOY, work hard on the craft, practice telling stories, and try your hand at poetry— at least read some. A dash of poetry in your work is like a dash of nutmeg on a pumpkin pie. Mingle with writers/editors as often as possible. Their good stuff can and will rub off on you.

A: Favorite authors. First, Diana Gabaldon’s Outlander series for everything: plotting, characterization, research, dialogue, love scenes, you name it. Next, Jean Auel’s series beginning with The Clan of the Cave Bear for her extraordinary creativity, the treatment of animals, prolific sex scenes, and the brilliance of her fictional world, and C. S. Forrester for his series, Horatio Hornblower. He is the Father, the Dean, the best of the storytellers of adventures at sea in the 18th and very early 19th centuries.

A: I am currently writing the sequel to Vampire Resurrection. The working title is Vampire Renaissance.

A: Coffee by the gallon. Distilled spirits (sounds better than “hard liquor”) as a reward after a long, hard day at the parchment, quill in hand.

A: The two on top of a tall, quivering pile: The Pagan Lord by Bernard Cornwell (another favorite author!), and Duty, by Robert M. Gates (non-fiction).

A: If I could be a character in one of my favorite novels, who would I choose? I shall interpret your question as pertaining to a novel that I have written. And that would be Yost. (I only gave him the one name.) He was a knight in the year 1402. I selected him for his cunning, his courage, and his wise choice of a woman. My favorite genre is Historical Fiction (not vampires). I have written a novella and two novels in the HF genre.

Born in Washington, D.C., Charles V. Brown wrote his first fiction short story in the fifth grade. He still has it; in fact, it is reproduced in his as-yet-to-be-published memoir, Sleeve an’ Me.
For years a dabbler in fiction, he allowed a thirty year Air Force career and an advanced degree, along with raising two daughters, three horses, breeding English Setters, playing innumerable Dixieland Jazz gigs, and a tour in Nam to get in the way of writing. His second novel, Viking Lady, won grand prize in the Maryland Writer’s Association’s annual novel contest, and then he got serious about writing.  After seventy-two years as a Marylander, Vic and Jenny moved to Williamsburg, Virginia, and rescued a cat–Crickett (with two ts!).  Vic still plays jazz and writes and critiques and basks in the warmth of a mighty-nice place to live: Windsor Meade.

Hippie chick who is still hoping to change the world someday. Author of the fantasy novel, Thief of Hope.
View all posts by Cindy Young-Turner →
This entry was posted in Book release and tagged horror, Vampire Resurrection, vampires, Vic Brown. Bookmark the permalink.

2 Responses to Interview with a vampire author