Posted on October 1, 2013 by Cindy Young-Turner

Congrats to Alythia Brown on the release on her novel, Dakota Captive! Another winner from Crescent Moon Press! 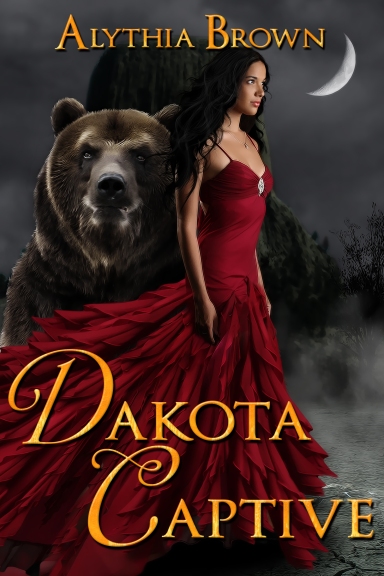 So all she has to do is try to keep her big mouth shut, get her memory erased and go home, right? Wrong. Because Jumlin’s Offspring are stalking Charli. And since no one can explain this unusual behavior, it becomes imperative to enter the Other World for sanctuary. Now if only she can figure out why she’s beginning to fall for one of her abductors on top of everything else…

An angry growl pierced my ears, and I looked back, despite my painful desire to crawl into a hole. The ridge of the bear’s back charged toward me in the moonlight, cutting down the distance between us faster than I could have hoped for a miracle. I screamed and gave my dash one last valiant effort before Matȟó Čhaŋté shifted into his human form and tackled me, probably swearing. He wasn’t speaking English, but I’m pretty sure he wasn’t asking me to stay for tea.

I tried to slap his face, but his quick hands caught my wrists. So, I spat instead. His eyes burned beneath the moonlight as he wiped my saliva from his cheek. I could have sworn he wanted to strangle me, his shaking hand poised in the air above my throat before he managed to compose himself and fling me over his shoulder like a bag of flour.

Three figures waited for our return in front of the teepee. Matȟó Čhaŋté threw me hard onto the ground as a reward for managing to kick him in the face. He shouted at me while inspecting his nostrils for any blood. Then he pointed and spoke in English for the first time.

As the man tore into the teepee, it was clear there would be no arguing with him. The other three stood like slabs of granite around me as I picked loose gravel from a fresh scrape. When Matȟó Čhaŋté returned with a rope, he knelt beside me in the dirt and began to bind my shaking wrists with no amount of tenderness. He was vindictive, determined to see me flinch with every yank as vengeance for forcing him from his bed. After he’d bound both my hands together, he tied the other end of the rope to one of his own wrists and abruptly pulled me inside the teepee.

“You will sleep now!” he bellowed, pointing to a fur spread out beside the fire.

A tear formed in my eye, but I was too proud to let him see me cry. I resorted to burying my face in the animal hide. Matȟó Čhaŋté dragged his bedding beside mine to settle down with a grunt that sounded more bear than human. I wondered if one could ever separate the two.

Alythia Brown was born and raised in the San Francisco Bay Area where she now lives with her husband and their three small children. She found her inspiration to write Dakota Captiveafter traveling to North Dakota to return an authentic peace pipe to the Sioux Natives. The artifact had been picked up after the Massacre of Wounded Knee in 1890, and eventually ended up in the hands of one of her ancestors—who, in turn, told everyone it was a wagon spoke. Alythia is the author of two short stories, published in the Mertales anthology, and she aspires to publish many more books for children, teens and young adults.

Hippie chick who is still hoping to change the world someday. Author of the fantasy novel, Thief of Hope.
View all posts by Cindy Young-Turner →
This entry was posted in Book release and tagged Alythia Brown, Crescent Moon Press, Dakota Captive, paranormal. Bookmark the permalink.