I’ve very pleased to have Maer Wilson on the blog today. Maer’s novel, Relics, was just released this month and looks to be another outstanding novel from Crescent Moon Press! Let’s take a look at Relics and then move on to the interview questions. 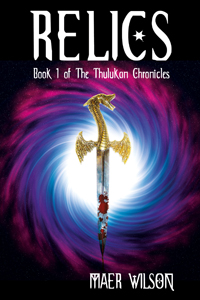 Most of Thulu and La Fi’s clients are dead. Which is perfect since their detective agency caters to the supernatural. So, a job finding relics for an ancient daemon should be simple.

The daemon needs the relics to keep a dangerous portal closed. His enemy, Gabriel, wants the relics to open the portal and give his people access to a new feeding ground – Earth.

Stunning humanity with their existence, portals to other worlds begin to open and the creatures of magic return to Earth.

When Gabriel threatens their family, Thulu and La Fi’s search becomes personal. The couple will need powerful allies in the race to find the relics before Gabriel does. But maybe that’s what grateful dead, magical allies and daemonic clients are for.

When the creatures of myth and magic return to Earth, they’re nothing like your mother’s fairy tales.

Add it to your Goodreads shelf

Thank you for letting me visit today!

A: I was born in Kansas, but spent very little time there as my father was in the Air Force and we moved around a lot when I was really young. Maybe that’s why I prefer to stay in the same place, now. I do enjoy traveling, but love coming home to my own house when it’s done.

A: Since I was young and in school. I’ve mostly written character studies and things like that. Bad poetry in high school. About twelve years ago I tried my hand at writing a play. It was awful. Five years later I recreated it as a screenplay that was much better. It was only three years ago that I decided to try a novel and here I am.

Q: What provided the inspiration for your newly released novel, Relics?

A: That came out of a gaming experience. I’d had an idea about a married heroine in a Paranormal novel, but hadn’t done anything more than jot down a note. I created the names Thulu and La Fi to give to some gaming friends of mine, but realized the names belonged to my characters instead. And who they were fully formed in my head very quickly.

A: The first draft took five weeks to write. I revised it, had it beta read, revised some more and started to submit it. After about eight months, I found out that a cliff hanger ending for a first novel was an almost impossible sell, so I ruthless ripped out the second half of the book and completely rewrote it, making it a standalone novel. Again, I wrote that very fast. By the time I revised, rewrote and added more beta readers, it was a little over a year after I first started writing it the first time that it was ready for submission again. I can’t even say how many times I revised, rewrote and tweaked this last version. I’d get an idea and run to add it or change something. I’d probably still be tweaking if I could. J

A: I did the usual “find an agent” thing for about ten months. Because that’s what we do right? We get an agent. At first, I was hopeful, but as I learned more about the publishing industry, I quickly devised a Plan B: apply to a small press and forget about the agent. The more I found out about the traditional route, the more I realized it wasn’t for me. Mostly due to the time. Being olderish, I didn’t want my book to take two to three years to see print. So, I almost began to look forward to agent rejections. Almost. Once I’d decided I really wanted a small press, I began researching and found a few I liked. Crescent Moon Press was my first choice. Of course, after agent rejections my confidence wasn’t very high and I had no expectations. I was so pleased when I heard from them very quickly to submit and it wasn’t long before they offered a contract. I’m thrilled to be a part of the CMP family.

A: Read everything you can get your hands on, especially in your genre. And make sure your manuscript is the best you can make it. I think too many new writers are in such a hurry that they don’t take advantage of the tweaking and revising that will make their work even better. Revising time is important and the polishing could make the difference between getting published or not.

A: Tim Powers because he encouraged me to write and I adore his style. George R.R. Martin for his ability to surprise me and J.K. Rowling for her storytelling talent.

A: Do interviews and blogs count? J Seriously, I’m doing a final revision of Book 2 in The Thulukan Chronicles, Portals, before I submit it. And I’ve started Book 3 of the series.

Q: You also run the increasingly popular MythBehaving podcast. How did you get involved in podcasting?

A: Thanks for asking about that, Cindy! I began writing for a gaming fansite, Corellian Run Radio about a year and a half ago and they also do a podcast. As one of the staff writers, I’ve participated in many of the podcasts. When I sold my book to CMP, Carla Clifton, who runs CRR suggested doing a literary podcast. It just took off from there.

A: Herbal tea and hard liquor. Not mixed together.

A: I’m almost done with Lindsey R. Loucks’ The Grave Winner. I was very lucky and received an Advanced Reader Copy and I love it. Next will be Mila 2.0 by Debra Driza.

A: Oh, I love this question! So many to choose from, but I think I’ll go back to one of my early loves and the Anne McCaffrey Dragonrider series. Lessa captured me years ago. Since I love dragons and Lessa bonded with her queen dragon she would have to be the one.

Cindy, thanks so very much for letting me do your interview!

After a successful career being other people, and later teaching others the many tricks of that trade, Maer Wilson has decided to be herself for a while. Turns out she’s a writer. She’s always loved stories, especially fantasy, mystery and sci fi. Maer was born in the Year of the Dragon and has a dragon-themed room in her home, but sadly no dragons in the back yard. When she’s not writing, Maer plays online video games, teaches college and reads. She also co-hosts the literary podcast, “MythBehaving” and writes for two gaming fansites. She lives in the high desert of Southern Nevada with her two dogs, a chihuahua and a poodle. Relics is her first novel and will be released by Crescent Moon Press on May 1, 2013. You can visit her website at maerwilson.com.