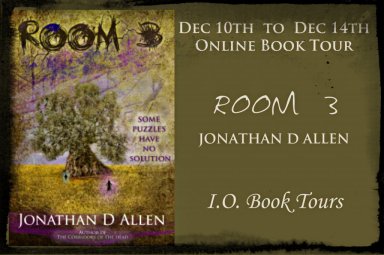 I’m excited to be part of Jonathan D Allen’s book tour for Room 3, his new release. I’ve got a giveaway and some great excerpt to share.

Book Blurb:
Torn away from everyday life and held prisoner in a tiny cabin, Kelli Foster must harden herself to survive torture and isolation. When Carla is introduced to Kelli’s small world, the experiments they are forced to endure take a dark turn. Kelli is forced to choose: Save her own life, or free her new friend? Sacrifice her dreams or sacrifice her love?

Following a failed escape attempt, Kelli, Carla, and Kelli’s lover Samarta work together to unravel the mystery behind the shadowy group that has kidnapped them all. Their path to freedom lies through mind-bending discoveries and globe-trotting adventures, culminating in a battle between godlike beings that hold Kelli’s fate in their hands.

Born and raised in the rural Shenandoah Valley of Virginia, Jonathan D Allen wrote his first

fantasy/sci-fi novel at the age of 13. After studying writing and communication at James Madison University, Jonathan turned his passion for writing into a full-time technical writing career in the DC Metro area, working for companies like Sprint/Nextel, Time Warner Cable, and Sirius XM Radio, where he had an opportunity to combine his love of music with his love of writing.

He may have drifted away from fiction at times, but it was always his first love – and he always returned to it. Now living in Bethesda with his wife, two cats, and two quirky guinea pigs for which his publishing company is named, he crafts the kinds of stories that he had always hoped to read but just couldn’t quite find.

This is the first time we see one of Kelli’s visions, following a an injection of the mysterious hallucinogen.

Something rustled in the corn. I whirled, but I knew who it would be before she even appeared. She always found me. “Mimi?”

A little girl appeared from between the rows, pushing the bottoms of the stalks apart. She had blue eyes, dark brown hair, and a smile that could just melt your heart – the kind of smile that never, ever survives into adulthood.

She cocked her head. “How’d you know my name?”

She always asked me that.

She put her hands on her little hips. “How come I don’t remember you?”

“I think it’s this place. It always makes you forget.”

I looked around. “I don’t like it much, either. But don’t worry about it. I’m here.”

Wheels turned in her head. “But why are you here?”

No clue how to answer that one. “You’re looking for something, right?”

I leaned down, putting my hands on my knees. “What are you looking for, sweetheart?” I already knew the answer, but this had gone down a certain path forever, and the show had to go on.

Cici. The girl forever searched for Cici. I had no idea if she even existed. “Now where did you last see your sister?” I said.

Her eyes widened, like I’d shown her the secret of the universe. “We did meet, didn’t we, that’s how you know about Cici?”

I nodded. “Where did you see her last?” Knew the answer to this one, too.

She pointed over my shoulder. “There.”

I knew what I’d see when I turned. I’d seen it so many times that I’d even started to see it in my dreams. It didn’t matter, though. Every single time I turned to gaze on it, it knocked me on my proverbial butt: an enormous, gnarled tree, soaring up into the sky. This wasn’t just any tree, though. Somebody had carved a wooden organ out of the trunk, with two levels of wooden keys and wooden pipes rising out of the higher reaches.
The largest keyhole you’ve ever seen had been connected to that organ, its details carved right into the trunk, between the keys and the pipes.

Carla shares one of her visions.

She turned her head toward me. It took me a little off-guard, because her eyes looked like deep black sockets, where no light ever escaped. “Have you ever seen somebody die?”

She looked back to the ceiling. “When I was about 21, I lived in this little townhouse just outside DC. Southern Alexandria. Not the nicest place, at least in those days, but I took what I could get. Anyway, one day I went out with one of my roommates, I don’t remember why, probably to get groceries, something like that, and there was this little hill that you had to go up near where we lived. As we were going up the hill, we heard a weird sound, and saw a shower of sparks a few cars ahead of us.”

“The car pulled off the side of the road, and the sparks died down, but something rolled off from the back of the car. Couldn’t quite tell what it was. We were far enough away that it just looked like a blur.” She sighed. “When we drove by, we saw that the sparks had come from a guy on a motorcycle who had gotten hooked underneath the back of the car. I guess he was driving along and this old woman cut him off without even realizing it. When he hit his brakes, he slid up under her bumper and got stuck there.”

“Dragged him about 200 feet. We had to get out and try to help, but what could we do, other than call 911? Car was off in the grass on the side of the road, and the motorcycle was on its side, looking like something big had chewed on it. I remember the gas cap had come off at some point, because you could smell gas pouring out onto the grass. It was a bad sight, but my eyes were drawn to the guy who had been driving the motorcycle. You know how you can’t just look away?”

“Yeah. He was lying down in the grass, arms up over his head, just breathing heavy. Not saying a word. When I got close, I could see that the bottom part of his right leg, from his knee down, was gone. It was nothing but ripped-up jeans. No blood, no bone. That bothered me the most, for some reason. My brain kept picking at that one thing – why was there no blood? My roommate told me later that it meant he was bleeding internally, and it must have been pretty bad.”

“It took him a couple of minutes to die. I guess the internal injuries were too much for him or something. But you could see when he died. I never believed in souls or anything like that, but…his body shook and he went limp, and it was like, I don’t know, something beyond just electrical impulses left his body.” She shivered and wrapped her arms around her chest. “I’ll never forget it.”

Let me tell you, it was quite the conversational upper. I had all the joy that I might feel if I’d been hit by a freight train. “I’m sorry you had to see that, but why are you telling me this?”

“Because I saw all that again in Room 3. Only he was conscious. He kept looking at me with these hazel eyes and asking why I didn’t save him, where was the ambulance, how could I let another person die like that.” She looked at me. “But by the time he was talking to me, we were back in the room, and he was standing up, right behind Barren.”

Samarta and Kelli arrive in Mexico and meet their handler.

Carlos gave these men a significant glance as he tucked his shades into his shirt pocket. “Come,” he said, and led us to the farthest table, positioning us so that he could watch them over our backs. Once we had all settled, he rubbed his hands together, giving a fake, toothy grin. “So. Your crossing was uneventful, I take it?”

Sam shrugged, a hint of just how eager he was to get to know the real Carlos. Not that I was much more eager; the contradiction between the guy’s grin and demeanor versus what I saw in his eyes put my nerves on edge. The sooner we were finished here, the better.

He got it, and he didn’t protest. “Right. I am glad you are safe.” He reached in his pocket and slid a set of keys across the table, glancing at the drowsing men from the corner of his sad, dark eyes. He told us the street name and number of the safe house.

Sam swiped the keys and slid them into his pocket. We rose together, but Carlos had other plans. He touched our wrists and looked down toward our seats “Please. Just one more moment.”

He leaned even closer to us, his arms hugging the tabletop. “Listen, friends. You must take the warnings seriously. The deaths in this city, some are from the drugs, yes, but our mutual friends wage wars for the souls of humanity with us as their pawns. Even you are expendable.”

Something about the way he said it… “We’re not the first people to pass through on your watch, are we?”

He tightened his mouth, and shook his head.

“Not all of them got where they were going, either?”

He shook his head again.

Sam put his hand on mine. “We will be cautious.”

Hippie chick who is still hoping to change the world someday. Author of the fantasy novel, Thief of Hope.
View all posts by Cindy Young-Turner →
This entry was posted in Book release and tagged fantasy, horror, Jonathan D Allen, paranormal, Room 3. Bookmark the permalink.