I’m excited to have another great Crescent Moon Press author on the blog today! Hildie McQueen is the author of Desperate Betrayal and the recently released CMP “Little Moon” novella, Desperate Choices. And Desperate Surrender is coming soon! She’s one busy author putting out some amazing books! 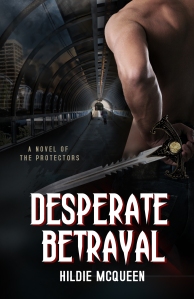 Cynden Frasier (Cyn) is a member of a group of immortal warriors, the Protectors, assigned to protect humans in Atlanta, Georgia, the epicenter of a major uprising in demon activity. When Cyn is approached by a beautiful woman in a dirty alley, he is intrigued by the fact that she can see him for what he is, a terrifying demon slayer, and still dares to approach him.

Emma Blake, a half-demon, has to convince Cyn to help rescue her sister from powerful demons. Terrified that the Protector will kill her if he realizes what she is, she still goes against every instinct and approaches Cyn for help. Despite knowing that she is leading them both into territory so wrought with treachery, neither of them may survive.

Can Cyn and Emma overcome betrayal, the ancient rules that prevent Protectors from taking a wife, unless she is his one true mate? And if they do, will it even matter?

A: I was born in Baja California, Mexico and grew up on the border between Mexico and California, USA.  From my bedroom window in San Diego, I could see Mexico, that’s how close we lived.  Up until moving to Augusta, Georgia sixteen years ago, I had never stayed in one place for too long.  When I was younger, I lived liked a gypsy, moving from place to place. I lived in San Diego, South Carolina, Germany, Texas, Hawaii and even for a short while in Pasadena, California.

A: I’ve been a voracious reader my entire life.  My interest in writing came when I began to read paranormal romance.  I wanted to be inside the characters’ heads, know more about what made them and what motivated them.  The only way to do it was obvious.  I began to seriously write romance about five years ago.

Q: What provided the inspiration for your novel, Desperate Betrayal?

A: Inspiration for my writing comes from situations that I daydream up, I took the story from there and drawing from what the characters ‘told’ me.

A: I wrote Desperate Betrayal in about three months.  The entire editing process was much longer.  Satisfied?  What is that?  Every time I read it, I think…Oh darn I should have written this instead… (Ha, I feel the same way! Not sure I’ll ever be satisfied with my writing.)

Q: And congrats on being one of the first of CMP’s new line of novellas, Little Moons, with Desperate Choices! How did you approach that project?

A: Amazingly, I already had the idea and was hoping that in the future the opportunity to tell Roderick and Rachel’s story would present itself.  Once I saw the opening for it, I rushed to write it since it was floating in my head.

A: It was a maze, chaotic and disorganized.  How about that?  Like everything I do, I rush head first into things until I get the answer I want.  It’s not the best process, but that’s how I roll.  *laugh*

A: Keep writing, don’t ever stop at one story.  The more you write the better you get at it.  Even after publication, keep writing!!!  Sometimes you have to pull stories out dust them off and polish them to fill a request.

A: Sherrilyn Kenyon – She is an amazing writer with a great gift for storytelling, plus her Dark Hunters are totally amazing males.

JR Ward – She just kicks butt when it comes to vampires. No one can beat the Black Dagger Brothers.  I can read her over and over; I wish I could write like that!

Molly Harper – Vampire Rom Com queen is how I see her. She makes you laugh with her larger than life vamps, weres and the witty companion characters

A: I am writing a paranormal fantasy romance.  Say that three times fast.  The story “Ruling Esland” is about a reluctant king who falls in love with a woman he meets and has an affair with.  Not only does she not know he is the ruler of kingdom she lives in, he doesn’t realize she is the leader of a rebellion against him.

A: I rarely drink coffee, I drink a lot of tea, my favorite is Earl Grey.  I also love a good southern sweet tea!  My evening drink of choice…a good smooth Scotch Whiskey!

On my TBR list are mostly books written by friends of mine.  Summerland by Elizabeth Cheryl, Perpetual Light by Jordan Rose, Breathless by Cole Gibson, The Never Prayer by Aaron Ritchey, Rise from Darkness by Ciara Knight and Stealing Breath by Joanne Brothwell…oh and how can I forget this book entitled Thief of Hope by Cindy Young-Turner! (*grin*)

A: I would be Julian, the leader of the Protectors; he is the most powerful and the one that seems to know where everything is headed.  I want inside his head!!!

I’m thrilled to be invited, thank you so much for the invite!!

After a jaunt in the Army, living in Texas, Germany and Hawaii, Hildie McQueen settled in Augusta, Georgia. She lives with her wonderful computer wiz, hubby Kurt and two tiny dogs (Pancho & Pepito) and a scardy-cat named Dyson that she hardly ever sees.

Writing has always been a part of Hildie’s life, but about three years ago, when a friend grabbed her and forced her to attend a Georgia Romance Writers, she decided to polish her skills and get serious about it. Now the characters won’t shut up and she’s always itching to get home and onto the laptop to write.

For more Hildie, visit her blog at  www.hildiemcqueen.com.