I’m very excited to have Gale Deitch, author of the culinary mystery, A Fine Fix, on the blog today! I’ve known Gale for a long time and she’s a member of my writing critique group. Seeing her book in print is exciting and I’m thrilled for her success. If you like culinary mysteries, you won’t want to miss the first book in the Trudie Fine series! 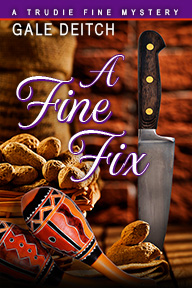 Things couldn’t be better for Trudie Fine and her partner, Zachary Cohen. It’s the first big job for their catering company, A Fine Fix, and everyone who’s anyone in the Washington, D.C. area will be at the Schwartzes’ backyard Mexican fiesta.

With the tables set, the food prepared to perfection, and the Mariachi band sizzling, Trudie is mellow as a Margarita smoothie…until a dead body is discovered floating in the pool.

When Zach is arrested as the prime murder suspect, Trudie sets out to clear him and find the real murderer. Life gets spicier than a jalapeño pepper when she realizes she’s the focus of three men’s affections, including the unnerving detective handling the case.

Soon, however, Trudie is reaching for her favorite knife, but not to chop vegetables.

A: I was born and raised in the Washington, DC area – actually in Riverdale, Maryland, and the first five years of my life lived in the original Greenbelt, Maryland, a community planned by Eleanor Roosevelt to provide jobs and affordable housing to young couples and families coming out of the Depression era.  Greenbelt has quite an interesting history.

I am definitely a homebody. After about three years of marriage, my husband and I moved into our current house in Rockville, Maryland, where we’ve raised two children, now adults. I still love our house and our neighborhood and wouldn’t think of moving anywhere else.

A: As a child, I loved to read anything I could get my hands on. I remember at six years old, my mother taking me to the local bookmobile to get me a library card. I had to sign the application, but with a last name like Lisogursky, I wasn’t able to do that, so they let me sign with an “x.” After that, I went to the bookmobile often to check out books and as I got older, my father took me to the nearest branch library.

At age eleven, my parents gave me a diary with a little gold key. I kept up that diary just about every day. As I got older, I often wrote long letters to cousins and friends in other areas.  When my sister got married and moved away, she always told me how much she enjoyed my letters.

Writing has always been the easiest way for me to express myself. In high school, in the midst of typical teenage angst, I discovered a love of poetry and wrote a whole booklet of my own poems. As an adult, I edited a newsletter and wrote articles for a non-profit organization I belonged to. As a young wife and mother, I began writing my first novel (still unpublished), took some creative writing classes and joined a critique group, a novel group and a writing group. I co-wrote an article that was run by The Washington Post, had my poetry and short fiction published in various literary journals and began attending a week-long writers’ workshop each summer in North Carolina.

Q: What provided the inspiration for your culinary mystery, A Fine Fix?

A: One summer at Wildacres, the workshop I attend each year, my character Trudie Fine popped into my head and wouldn’t go away until I began putting her down on paper.  Rather than making Trudie the typical thin beauty we usually read about, I wanted my protagonist to be someone the average woman could identify with, someone with physical insecurities. So Trudie, although she has a pretty face, is short and plump and constantly dieting.

I transferred my love of food and cooking to Trudie and decided to make her a caterer. As I developed the story, I realized it should be a mystery, and threw a dead body into the first chapter at Trudie’s first important catering gig.

Q: Trudie Fine, the heroine of A Fine Fix, is such an interesting character. She’s a chef, the owner of her own catering company, and an amateur sleuth. I felt like your novel really captured her voice. Why did you decide to write the book using first person point of view and were there any challenges in doing this?

A: I began the book in third person, but as I wrote, I kept unconsciously slipping into first person.  It became obvious very quickly that this book needed to be written in first person. Once I began doing that, the writing flowed much more easily, and I felt as if Trudie herself were looking over my shoulder dictating the story.

A: It took me a few years to publish A Fine Fix, primarily because I was not writing consistently. I would write a chapter or two and present it to my critique groups. Then I might not write for another month or two. I was very inconsistent in my process. But there came a point when I realized I had finished the book and had run it through my critique groups twice.

I was ready to publish, but how? Should I take the traditional route and try to get an agent or should I self-publish, something I saw many writers were doing very successfully? I began to look at other books that had been published in this genre, cozy culinary mysteries, and was put off by the cartoonish cover art and the unappealing interior formatting.  Many authors in this genre were putting out book after book for their publishers, and I wondered how much control they really had over their work.  I decided that I wanted complete control over my book, such as the cover art, the formatting and the pricing of the book.  I did not want to give up royalties to a publisher who would make all those decisions for me.

At this point, I had a few writer friends who also had made the decision to self-publish. Together, we bumbled through the process, which turned out to be easier and much less costly than I had expected. Once published, readers of the cozy culinary mystery genre seemed to embrace the book, and sales took off. I don’t at all regret my decision to self-publish and will continue to do so with all of the books in the Trudie Fine Mystery Series.

1) Take a creative writing class and/or attend a writer’s workshop.

A: I have many authors I love to read. Some of my favorites are:

Ann Tyler – Her characters are quirky but believable even though they often do unbelievable things, like in Ladder of Years, where a wife and mother strolling on the beach simply decides to keep walking and literally walks away from her life.

Jodi Picoult – I told her when she signed a book for me that she writes the best first lines I’ve ever read. I can even quote some of them, they are so memorable. She also writes about controversial subjects and, through her characters’ points of view, shows the readers all sides of the issue. Plain Truth, the story of an unmarried Amish girl accused of murdering her newborn baby, is one of my favorites of her books.

Ann Patchett – This novelist has the gift of putting her readers right into the story.  One of my favorite books I have ever read is Bel Canto where a group of internationally renowned people attending a party at a wealthy estate in Argentina are taken hostage by rebels.

A: I’m currently working hard to finish book 2 of the Trudie Fine Mystery Series, Fine Dining. I hope to have it done by this summer.

A: Ha! Great question.  I’m a true, blue coffee drinker. Love it black and bold with a little sweetener. But I also enjoy a great margarita, martini or cosmo.  I rarely drink tea, only with Chinese food or when I’m sick.

A: I generally enjoy reading literary fiction, but I like to vary that with other genres, like mysteries or thrillers or classics. I just, in fact, enjoyed a re-read of Pride and Prejudice and some short stories by Ernest Hemingway that I hadn’t read before. I also recently read, and enjoyed Gone Girl and The Burgess Boys.

On my list to read soon are Middlemarch and Silver Linings Playbook. Beyond that, there are so many on my list like The Lowland and The Middlesteins.

Yikes! So many books to read, so little time.

A: Having just read Price and Prejudice, I would definitely be Elizabeth Bennett. Darcy is hot!

Cindy, thank you so much for featuring me and my book, A Fine Fix, on your blog.

It was a pleasure and an honor to answer such interesting questions.

Gale Deitch enjoys writing all types of fiction–novels, short stories, flash fiction and poetry. Her flash fiction piece, Prima, has been featured in the March, 2013 issue of literary magazine, the Rusty Nail, and her poetry in the 2011 Maryland Writers Association poetry anthology, life in me like grass on fire, love poems. In the fall of 2013, literary magazine The Writing Disorder, will feature her short story, Pressing Matters.

Although most culinary mysteries take place in small town U.S.A. locales, having been born and raised and still residing in the Washington, D.C. area, Gale’s Trudie Fine mystery series, and much of her other writing, is based in her hometown, Washington, D.C.

Gale works for a large non-profit nursing home and senior living system. She has two grown children and lives with her husband in Rockville, Maryland.

For more information, check out her blog at www.gdeitchblog.com.

Hippie chick who is still hoping to change the world someday. Author of the fantasy novel, Thief of Hope.
View all posts by Cindy Young-Turner →
This entry was posted in Interview and tagged A Fine Fix, culinary mystery, fiction writing, Gale Deitch, mystery series. Bookmark the permalink.