Posted on September 10, 2011 by Cindy Young-Turner

This is the first in what I hope will be an ongoing series of interviews with some talented authors, showcasing them and their fabulous books. 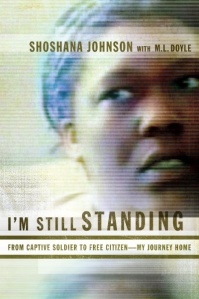 Please welcome M. L. Doyle, co-author of I’m Still Standing: From Captive U.S. Soldier to Free Citizen – My Journey Home, which chronicles the story of Shoshana Johnson, a member of the 507th Maintenance Company who was captured during an ambush and held prisoner in the early days of the Iraq War. Published by Touchstone in 2010, the book was recently nominated for an NAACP Image Award in the literary category for best Auto/biography. Mary and I belong to the Novel Experience critique group and I’ve had the privilege of also reading her novels. You will want to keep an eye on this author!

Now on to our questions.

Q: Where were you born? How many places have you lived? Are you the kind of person who likes to move around a lot, or do you prefer to live in one place?

A: I was born in Minneapolis, Minnesota, raised in a little town called Excelsior, but spent most of my adult years in Minneapolis. Like most people, my hometown was the one place I didn’t want to stay the rest of my life. I always wanted to live elsewhere. Part of the reason why I joined the Army was to travel and see the world. While I was in the Army Reserve I went to a lot of different places…Honduras, Guatemala, Bosnia, Panama, Thailand. When I had an opportunity to move to Germany and work for the Army as a civilian there, I took it. I ended up staying there for seven years. It was a great opportunity to travel. I traveled so much in fact, my time at home was less than my time away from home living out of a suitcase. Poland, Egypt, Bulgaria, England, the list goes on and on. After seven years, I returned to the states, then took a job in Seoul, Korea and lived there for eighteen months. Now I live in Baltimore, Maryland and if I’m completely honest, I’d really love to move back to Minneapolis, Minnesota.  It’s funny really. I’ve traveled most of the world, only to discover home is where I really want to be.

A: I didn’t concentrate on getting a degree until I was in my late twenties, which ended up being a good thing since I was mature enough to really understand what I wanted to study…and writing was something I wanted to study. For some reason, taking a class was the mechanism I needed to actually put word to page, even though I’d been composing stories in my head forever. I took a couple of creative writing classes and wrote a bunch of short stories.  I also took a couple of screenwriting classes and wrote a feature length screenplay. In all those years, I was writing short fiction, never once thinking I would write a novel. It wasn’t until I took an adult education class at a local college that I finally found the motivation to try a novel. I took a class called Mystery Writing for Beginners. We were supposed to end the course by writing a short mystery.  My short story turned into my first novel, Peacekeeper’s Photograph.

Q: Tell us about your experience as a ghost writer. What was it like working with someone to write their story?

A: I wonder now if I would have accepted the project if I had understood how intense it would be. To sit and listen to someone else’s story, a story that is very personal, revealing, and filled with all of the triumphs and humiliations any life holds, and have that person trust you with all of their secrets is very humbling. Then, to have this person look to you to tell that story in a way that will make their sacrifice worth the effort, well the pressure was and is something that never leaves you. After I finished the project with Shoshana, I said I wouldn’t do it again. To be a ghost writer of memoirs is like being a cross between a physiatrist and a gossip columnist. Your client reveals every deep, dark secret to you, only to have you tell the world about it in your pages. I’m telling you, the responsibility is enough to keep you up at night!  When my second ghost writing project came along, I didn’t hesitate. I accepted the job. Now, I’m back to the…I don’t ever want to do that again…phase, but that might change.  Depends on the person and the story they want to tell I think.

Q: How long did it take you to finish the book? How many drafts did you write before you were satisfied?

A: Simon and Schuster gave me a deadline to meet. When your first publisher gives you a deadline, you had better meet it. I was offered the project in January, awarded the project in February and had to have a finished draft to them by August. I was living in Korea at the time, working full time and petrified by how ignorant I was of what I was doing. I’d never written my own memoir, let alone anyone else’s. The six month deadline meant I had no personal life at all. I took three day weekends every chance I could, spent every holiday, evening, weekend, every spare moment doing nothing but writing. People would ask me what I was doing for the weekend. I’d say, “Ass in chair, fingers on keyboard.” I sent Shana pages as chapters were finished and rewrote in her changes and suggestions as we went along.  By about month four, I had a first draft. She sent me photos she wanted to include.  I wrote cutlines for them. I gave the entire manuscript a complete rewrite but the book pretty much kept the same shape as the first draft. Most of the changes were about style and voice. I sent it through a line editor and through my agent, before we sent it to the editor at S&S. The editor had a few changes and additions she wanted but for the most part, the fourth draft is the one that was published.

A: Circuitous. I’d written a mystery and used that to find my agent. My wonderful agent, while shopping the novel around, ran across this ghost writing project. Did I ever think I would be ghost writing memoirs? HELL no. I wanted to write novels. Now here I am with two ghost written memoirs, one published and two mysteries which still don’t have a publishing home. In many ways, I feel as if Shana’s project was a gift. If I can publish something else, I’ll feel like a REAL writer!

Q: Congratulations on your NAACP Image Award nomination! What an honor! What was it like to walk the red carpet?

A: Totally surreal. Of course, so much of the evening was lost to me because I was so nervous about the award announcement. When we didn’t win, I could relax and really enjoy myself. It really is true when they say, just being nominated is honor enough. It would have been cool to win, but just being there, meeting so many interesting people, finding out just how real and friendly so many of the stars really are…it was all just a magical experience. I felt humbled and honored and still so totally freaked out that the book received that kind of recognition. It felt good to know that my efforts are what brought Shana out to enjoy the evening as well.

A: Write. Stop waiting for the right time, the new computer, the outline to be done or even the great idea to come along. Just put word to page and see what happens.

A: Dick Francis – his mysteries make me feel like I’m settling down to a comfortable cup of hot chocolate and a blanket.  David Liss – his historical fiction mesmerizes me. Steven Pressfield – love the way he describes the soldier’s life through the centuries. His battle scenes are so well drawn you can almost smell the sweat and blood. Jim Butcher – love his modern day wizard story.  I could go on and on.

A: I just finished a ghost writing project called General Mom, about the first African American female brigadier general of the line in the Army National Guard. Her life is full of triumph and tragedy and a story I think most will find inspiring. I’m working on what I hope to be the final rewrite of the second book in the Master Sergeant Lauren Harper series called The Engineer’s Tomb.After that, I think I’ll rest : ).

A: I’ve been reading a ton of fantasy lately. Right now, my Kindle is turned to a book called Pagan, about a guy’s guy who leads a team embroiled in a vampire war in England. Totally mindless paranormal fun. I’m totally into the over the top, vampire war, zombie war, gangster shoot ‘em up, superpowered superhuman stuff. I’ll read that stuff while having a mani-pedi and considering what dress to wear to dinner. Like the macho but I’m still a girl.

Thanks so much for stopping by, Mary!

M. L. Doyle has served in the U.S. Army at home and abroad for more than two decades as both a soldier and civilian. A Minneapolis native, Mary currently lives in Baltimore, Maryland. She is the co-author of I’m Still Standing: From Captive U.S. Soldier to Free Citizen – My Journey Home, published by Touchstone in 2010. Mary is currently working on a mystery series featuring Master Sergeant Lauren Harper, an Army public affairs specialist who travels the world on Army business only to find herself embroiled in one dangerous situation after another. The first book of the series, The Peacekeeper’s Photograph, takes place in a small Army outpost during the Bosnian Peacekeeping mission. The Peacekeeper’s Photograph, which is yet unpublished, was the winner of the Carey McCray Memorial Literary Award for best novel from the South Carolina Writer’s Workshop. Mary is hard at work on editing the second book in the series, The Engineer’s Tomb. She also blogs for the Write Workshop at http://thewriteworkshop.wordpress.com.

Hippie chick who is still hoping to change the world someday. Author of the fantasy novel, Thief of Hope.
View all posts by Cindy Young-Turner →
This entry was posted in Author interview and tagged I'm Still Standing, M.L. Doyle. Bookmark the permalink.